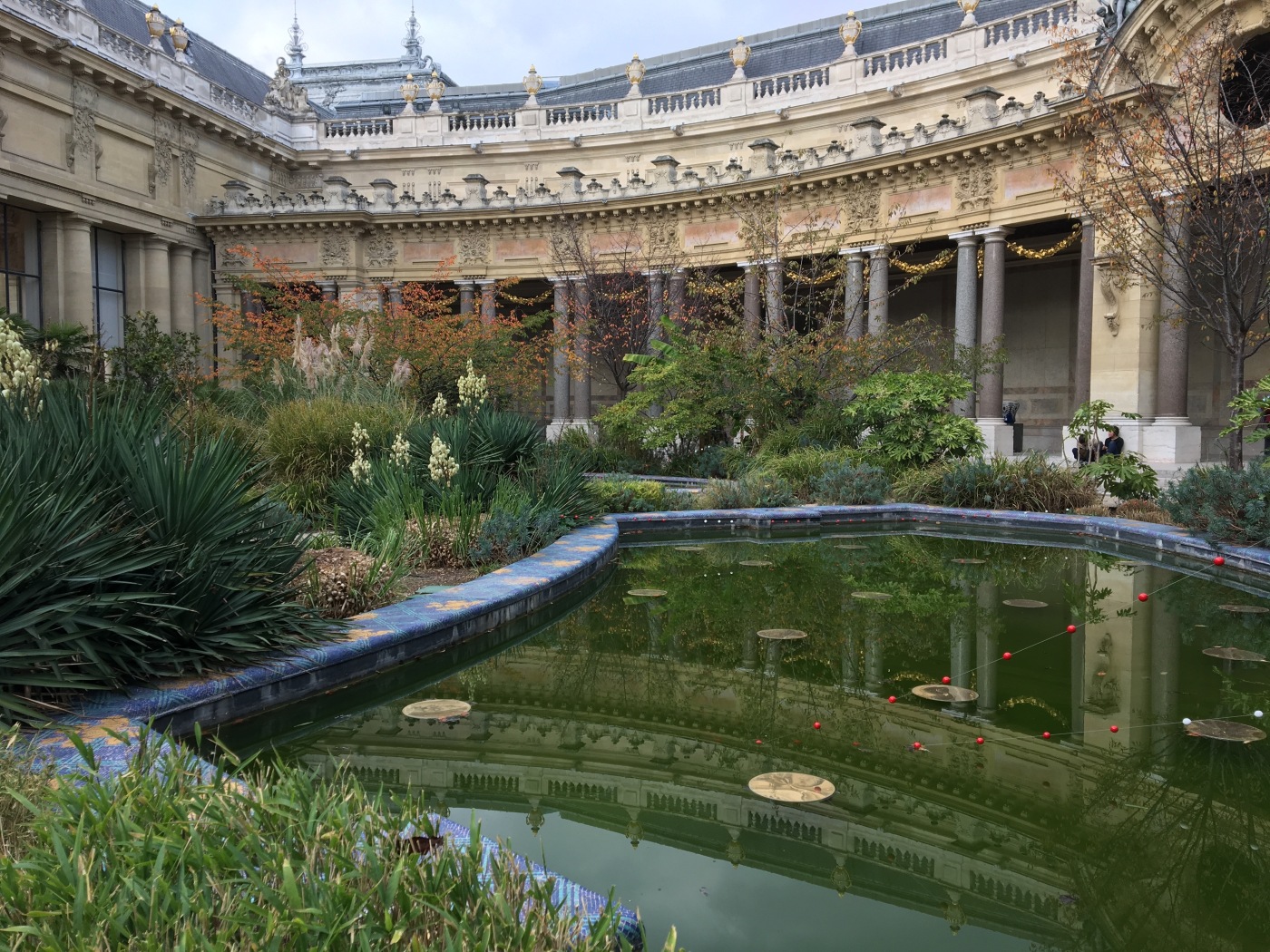 On Thursday I headed straight for the Eiffel Tower upon waking. Another stop I had not planned, but I was making great time with all my sites and had time for more. It’s such an iconic landmark, it seems bizarre to actually be next to it. As you walk towards it, you can catch glimpses of it through the Eiffel-style buildings. It feels like you’re looking at something from another word. It’s so large compared to everything that seems so relatively normal surrounding it.  You feel so small as you approach it, and that morning there was a sort of haze that made it seem even more fantasy like.

It was early, so the line was short. I skipped to the front with my ID, and was soon climbing the countless stairs to the upper levels. The stairwell did a good job of making you feel safe during the climb by surrounding you with rails and iron, and yet it was open air enough to not feel claustrophobic. The stairs weren’t crowded at all for obvious reasons, but every time I passed others going up or down, we shared a nod of understanding. We were hot, fatigued, but happy. Next to me, the giant elevator cables strained and pulled up loads of tourists, the giant counterweights methodically pumping up and down at the bottom.

I reached the second level. Paris was awash in a light fog and looked magical. The city sprawled out in all directions, and I could see landmarks like Sacre-Coeur, Notre Dame, the Louvre, and the Seine river snaking through it all. The climb was certainly worth it, though the long elevator line for the top level was long enough to not tempt me to continue up at all.

Back on the ground, I ordered an Uber to save my feet the walk to the Arc de Triomphe. One terrifying drive later and I was at the Arc, going down into the tunnel to pass underneath the busy roundabout to get to the entrance. Honestly, I think the Arc is more impressive from the outside and on the ground than the top. The top has a good view of the Champs-Elysees, but after seeing the sights of Paris from the Eiffel Tower, it was too similar, and not as high. I’m glad I went once, but I don’t think I’d make an active choice to go again.

I walked down the Champs-Elysees with the intention of finding the Grand Palais museum. It was lunchtime, and the streets were crowded with Parisians and tourists out to eat. After a leisurely lunch myself, I bought tickets to what I thought was the Grand Palais, but was in fact a discovery museum. The most expensive ticket I bought on my Paris trip and it wasn’t even for anything I wanted to see. I consider it a donation. The Grand Palais itself isn’t open to the public, but the Petit Palais was, and was the museum I’d been looking for.

The Petit Palais is probably up there as one of my favorite museums in Paris. It’s considered the Musee des Beaux Arts, and houses the type of artwork I love most. 17th and 18th century art, the building itself open and airy, with painted ceilings and intricate wrought iron designs over the tall windows. It felt like walking into La Belle Epoque. I wasn’t overwhelmed by art either, unlike at the Louvre. I felt like it was easier to appreciate what was before me in smaller doses. Intricate porcelain objects, furniture, jewelry cases, and even a sedan chair were interspersed with paintings and statues. A small courtyard in the center was overgrown with greenery and bubbled with fountains, creating a gorgeous setting amongst the pillars of the walkways and colorful windows.

Next, I walked over to Place de la Concorde with a nutella crepe and Orangina as a snack. I sat on a low concrete wall to eat and watch people go by, thinking about all the lives lost to fanaticism and the guillotine during the Reign of Terror, right here in this space. Marie Antoinette for one. I am oddly fascinated by the French Revolution. How people were swayed so strongly by beliefs and plunged into violence and fear, distrust and betrayal. To me, the Egyptian Obelisk that now graced the center of the square doesn’t make a lot of sense, but there is a plaque on the ground to commemorate the deaths of Marie Antoinette and her husband, Louis. To the right was the National Assembly – I couldn’t help but wonder what MA’s final thoughts were in this place.

I continued through the Jardin de Tuilieries. It’s a beautiful open space with perfectly trimmed trees and bushes, but I may prefer the Luxumbourg gardens a bit more. It could of course be down to the side of the garden I was on or the season I was visiting, who knows. Crossing the Seine, I entered the Musee d’Orsay, another one of my favorite museums in Paris. Originally a train station, this large building on the riverfront now houses famous pieces of art from the Impressionists among others. I saw paintings I’d studied my whole life finally in person. Works by Monet, Manet, Rodin, Van Gogh, Cezzane, Toulouse-Lautrec… Most notable for me was the painting by Monet of a woman and child walking in a field of red flowers. A copy of this painting hung over our couch at our house on Fairmont Street my entire childhood. I also saw the painting of a woman in white with an umbrella, being buffeted by wind. This was the painting I had attempted to copy onto a shelf for my final art history project in high school, and if that taught me anything, it’s that impressionistic painting is extremely difficult, and certainly not my talent.

I metroed home for the evening, glad that navigating the maze-like stations was getting easier and easier. I’d still like for the stations to have twice the number of signs, and the signs themselves should be twice as large as well. I picked up a hot baguette sandwich with potato, cheese, and salami along with a delicate pastry and spent the rest of the evening in, resting my screaming feet.