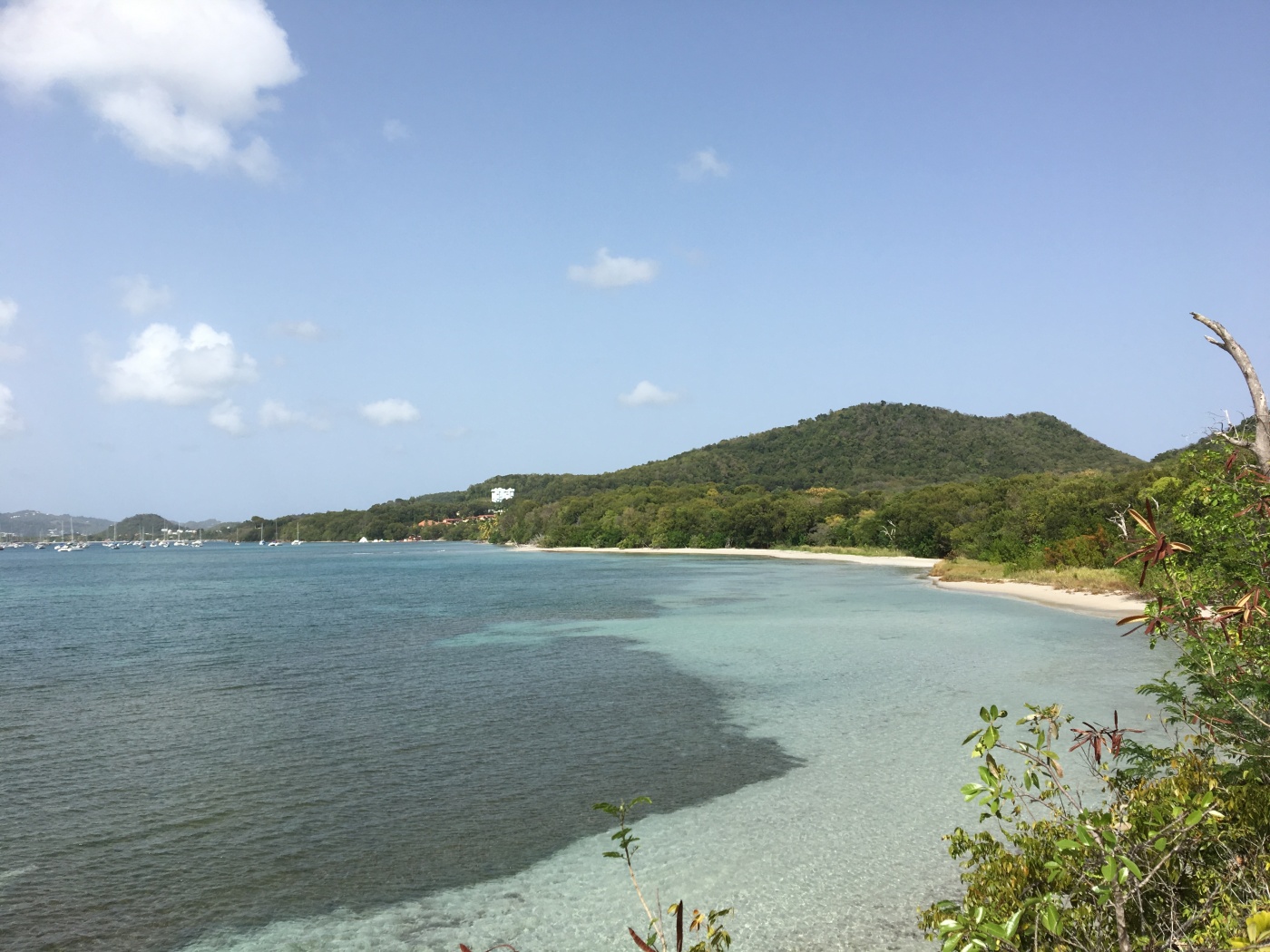 On Monday morning, I decided I was brave enough to go on a hike listed in my new Martinique hiking book. I entered what I believed to be the address in my phone and set out. Soon enough I was out of the city and on the winding forest roads of the pitons, getting farther and farther from civilization. Luckily there were plenty of joggers and walkers out, so the few people I hesitantly asked in French were able to point me forward.

I reached the end of the road after what seemed an eternity. I had nothing but my little purse, walking shoes, bathing suit, and sense of adventure. I locked my car and set out down the path. The path ended at a river, but I had been told that this river was the path, and I had to wade up it into the rainforest.

My ears were full of the sounds of the water tumbling over the rocks and birdsong. There were hundreds, thousands of bird flying and chattering around me. The cliff faces on the sides of the river rose up steeply, and every now and then I found a mini-waterfall, but those were not my ultimate goal. I got further and further from humanity, civilization. My knee was smarting from a bad fall on the rocks, and my heart was pounding due to exertion and nervousness. I had no map, no cell service. I just had a snack and a bottle of water. No one knew I was there. I was miles from home, from anyone I knew.

Every time my fear bubbled to the surface, I found a cairn – a rock sculpture that someone before me had left behind. You could see that each person on the path had added a rock as they passed, and each twist in the river sent me a new glimmer of hope in these rock sculptures.

It was hard to be too fearful – my surroundings were breathtaking. The banks of the river rose so high and steep on either side it feel like the rainforest was swallowing me up. The vines from the trees reached down from an impossible height as if to shake my hand. Little lizards jumped across the rocks in front of me, seemingly baffled by such a large, blundering creature in their midst.

And suddenly, a final twist in the river, and the banks opened out to reveal the falls. The falls themselves were tucked back into a cliff, so the only way to reach them was by swimming. I threw my things on the bank – no fear of thieves that far in no man’s land – and dove in. I waded and swam the thirty or so feet up to the falls. The water was crystal clear and chilly – a delightful contrast to the warm, humid air. And just before the waterfall, a boulder, peeking up through the crashing white bubbles from the falls.I sat there for ages. I watched the falls, breathed in the air, listened to the birds. I was completely alone.

I returned down the river, hopping down the waterfalls on my way back. My shoes were soaked, and I did drop my purse into the river for a hot second. Just before I reached the car, I met a man embarking on his own hike. We shared the quiet nod of adventurers.

I only learned later that what I did wasn’t actually a hike. I had, of course, read the book wrong. I literally just walked up a river in the rainforest in Martinique. That explains the solitude, and the distinct lack of trail. And yet, I’d do it again in a heartbeat, hopefully with just as much luck the next time. Onwards to St. Anne and Les Salines.

I hadn’t planned on going to Les Salines, which is a picture perfect beach front in the south east of Martinique. However, Sara and Yanis wouldn’t hear of me missing it, and insisted I go. I drove around the pitons of the south, and managed to see a gas station with no line at all. I was absolutely taken advantage of by the workers. When one man came up to the window and said “how much?” I knew I was out of luck. “All?” I hesitantly respond. “Tout?” I finally just gave him 30 euros and he got the message. In any case, it worked, and I had gas.

I ate lunch at a quiet beach side restaurant, with seemingly only one employee and perhaps a chef in the back. I asked for whatever the most authentic meal was, and although I have no idea what exactly I ate, it was the most delicious meal of my trip. I had an appetizer of what seemed to be fritters of some sort. For the main meal, I had chicken with what I think was papaya sauce, and what looked like mashed potatoes but was actually a banana gratin, soft and flavorful. For dessert, a fruit salad, with such bright and sweet flavors it made fruit back in the US seem like shadows.

I picked another hike from my book and set out to Les Salines. This was definitely a more popular beach, but I luckily found parking. The landscape was familiar – almost like that on Presqu’ile de Caravelle. Thick mangrove forests up until the beach itself. But this beach was beyond compare – pristine white sands, palm trees leaning out over the beach, and the water itself – clear and calm and brilliant blue. This was a true Caribbean paradise.

There were more people than I’ve typically seen on a beach, but not crowded by any stretch of the imagination. French families and friend groups, with Martinique locals pushing carts of tropical frozen ices down the sandy paths. The trail began here, and followed the coastline around to the west.

This was an enjoyable hike, though nowhere near as exciting or breathtaking as Caravelle. (That will forever be hard to top). I walked through mangroves, found more sky high cacti, and definitely stumbled upon some unsuspecting European bathers, if you know what I mean. When I returned to Les Salines, I laid out on the beach a while and felt safe enough with several families nearby to swim in the ocean and dive into some waves. I drove home with the taste of salt on my skin.