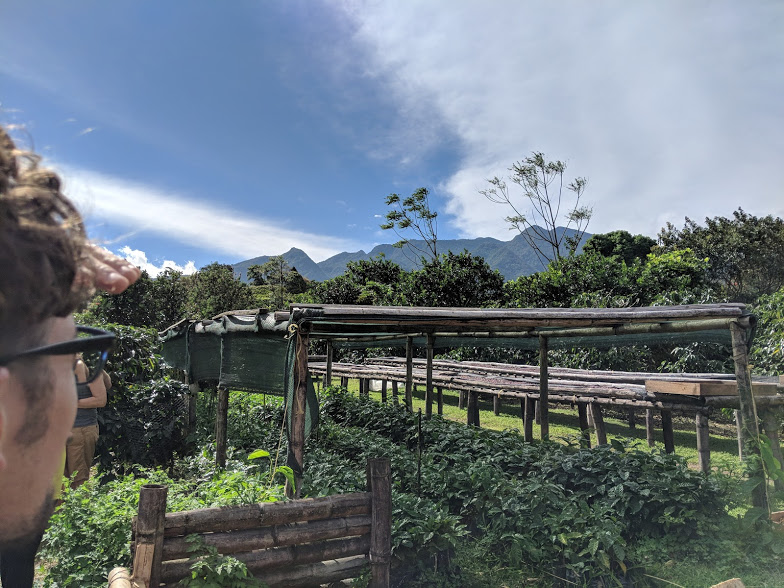 On Wednesday morning, Zach, Clayton and I enjoyed a last breakfast in Valle del Anton before hitting the road to our respective destinations. Zach was following Christine back to Panama City, and Clayton and I were striking out on our own. Our last Spanish lifeline was leaving us, and we would be left with nothing but our wits and a few Duolingo lessons under our belts.

The drive to Boquete started out a bit harrowing, as we were following the shortcut recommendation from Ursula, our B&B host. For a more detailed account, including a ten-point turn on the side of the mountain, see my post on driving in Panama here.

After many hours of driving, we finally made it to Boquete, an idyllic town in the highlands of Panama. It’s known as the “land of the eternal spring” due to its balmy climate year round. The town lives in the shadow of Volcán Barú, from the summit of which you can see both oceans on a clear day. (Alas, the 12-hour hike to do so wasn’t in our itinerary this trip). Boquete is the destination for a good number of ex-pats due to the climate and general beauty, and the prices tend to reflect that. However, because it was a touristy town, it meant that we had some delicious restaurants to tempt us and an overall elevated patience level with our broken Spanish.

Our first stop was Finca Dos Jefes, a coffee plantation on the mountainside overlooking Boquete brought to life by two American ex-pats. The seven acre farm has an abundance of coffee plants, fruit trees, and flowers. Slightly late, we parked our Kia and joined the group of tour-goers having coffee tea on the shaded patio, listening to a young Panamanian woman with impeccable English and a plethora of tattoos. Amy, the tour guide, was a relatively recent hire of the plantation, but knew the coffee industry backwards and forwards, becoming a strong advocate of fair farming practices in the coffee world.

Just like most every agricultural product, there is a lot of injustice that goes on behind the scenes of producing what you probably enjoy in a mug each morning without thinking. Workers usually deal with terrible conditions and pitiful pay. In Panama, for example, many coffee plantations will employ workers from indigenous tribes, and pay them the same rate that they paid their great-grandparents, banking on a poor education system and lack of leverage from the workers.

Finca Dos Jefes believes in a fair wage, and is one of the rare “direct trade” producers. Direct trade eliminates the middleman by allowing coffee roasters and shops purchase coffee directly from the farmers. Farmers and roasters develop a mutually beneficial relationship, as buyers will visit to inspect the quality of the coffee,  worker conditions, and sustainability practices, all at no extra cost to the farmer. You’ve probably heard of Fair Trade – while although Fair Trade is a good practice, Fair Trade standards are regulated by a third-party non-profit and farms need to pay upwards of $10,000 in certification fees to be eligible. With Direct Trade, farmers are rewarded for growing good coffee as well as treating their workers and environment with respect, without hefty certification fees.

After hanging on to Amy’s every word for several minutes, we left the shade of the patio to go out into the farm itself. We walked through the raised beds of picked coffee cherries drying in the sun, encouraged to run our hands through them to allow for more to see sunlight and dry out. There is nothing quite like running your hands through hundreds of warm coffee cherries, blue sky above and birds singing. Amy continued to teach us about how coffee is made as we walked, something I never really thought about. The cherries, picked from the coffee plants all around us, would finish drying on the tables with the skin and fruit intact, the sun adding to the natural flavor of the coffee. Once dried to a specified moisture content, the cherries are left to “rest” in bags for at least three months before they’re peeled and crushed to get the green beans out and ready to roast. This allows for a sweetness and flavor to fully develop and absorb into the beans. (Most coffee producers will peel the skins off and rinse the beans, losing all that flavor). The production process of Finca Dos Jefes doesn’t just take sunlight into account – Cafés de la Luna, the coffee they produce, is farmed in alliances with the moon according to ancient farming practices. According to their website, during the waning of the moon, “when the earth inhales”, they furnish organic nutrients into the soil. Then during the waxing of the moon, when force pulls upwards, they nurture the trees to foment growth.

Continuing on, we passed some compost heaps, and were greeted by some friendly farm dogs that clearly loved tourist attention. Back at the main building, Clayton was chosen from our tour group to roast some beans. (We had a heads up this was coming so he was able to volunteer quickly – thanks Zach!) Amy explained the extremely specific chemical processes that were going on in the roaster, pulling out beans at each stage so we could see the beans go from green and plump to dark and compact. Not only does the temperature of the roaster matter, but how long the beans are kept at each temperature matters, how long it takes to get to those temperatures matters, etc. Clayton roasted like a pro, and Amy divided up the beans so that each tour goer could take home a small bag.

Clayton and I headed back down the mountain, following Amy’s direction to avoid the incline extraordinaire (apparently that hill caused issues for other tour goers as well). Soft rains came over the valley and a double rainbow arced over the town. We found our hostel after only going in three or four circles around the block, wondering how they could possible not thing a sign of any kind out front was important. We should have followed the rainbows – instead of a pot of gold, the foot of the rainbow was right where our hostel was! The lady behind the front desk was incredibly patient with our language barrier, and quietly waited as I translated everything using Google Translate on my phone. It slowly came to light that the town had no water until late that evening. For what reason, Google couldn’t tell me, but we’d make do without. We dumped our bags in the room and set out immediately to see the town.

Boquete certainly has more Western influences than anywhere else we’d seen in Panama, due to the high number of ex-pats. Perhaps because of this, it appeared wealthier than any other areas we’d seen outside Panama City. We passed the central square, still covered in Christmas lights. It was pretty jarring to see the holiday decor with sweat running down our backs – after several days in the heat and humidity of Central America, it was so easy to forget that it was still January.

Having eaten minimally all day, we were ravenous. We headed to Retrogusto, an Italian restaurant on the main drag. An Italian restaurant in central Panama, you say? Buon appetito, we said! We went there on recommendation from Zach and Christine, and we were not disappointed. The food was delicious, the servers excellent, and the experience lived up to all expectations. Stomachs full, we meandered back to the hostel, and despite the copious amounts of coffee we’d tasted, were soon fast asleep.

One thought on “Sipping Coffee in the Shadow of Volcán Barú”