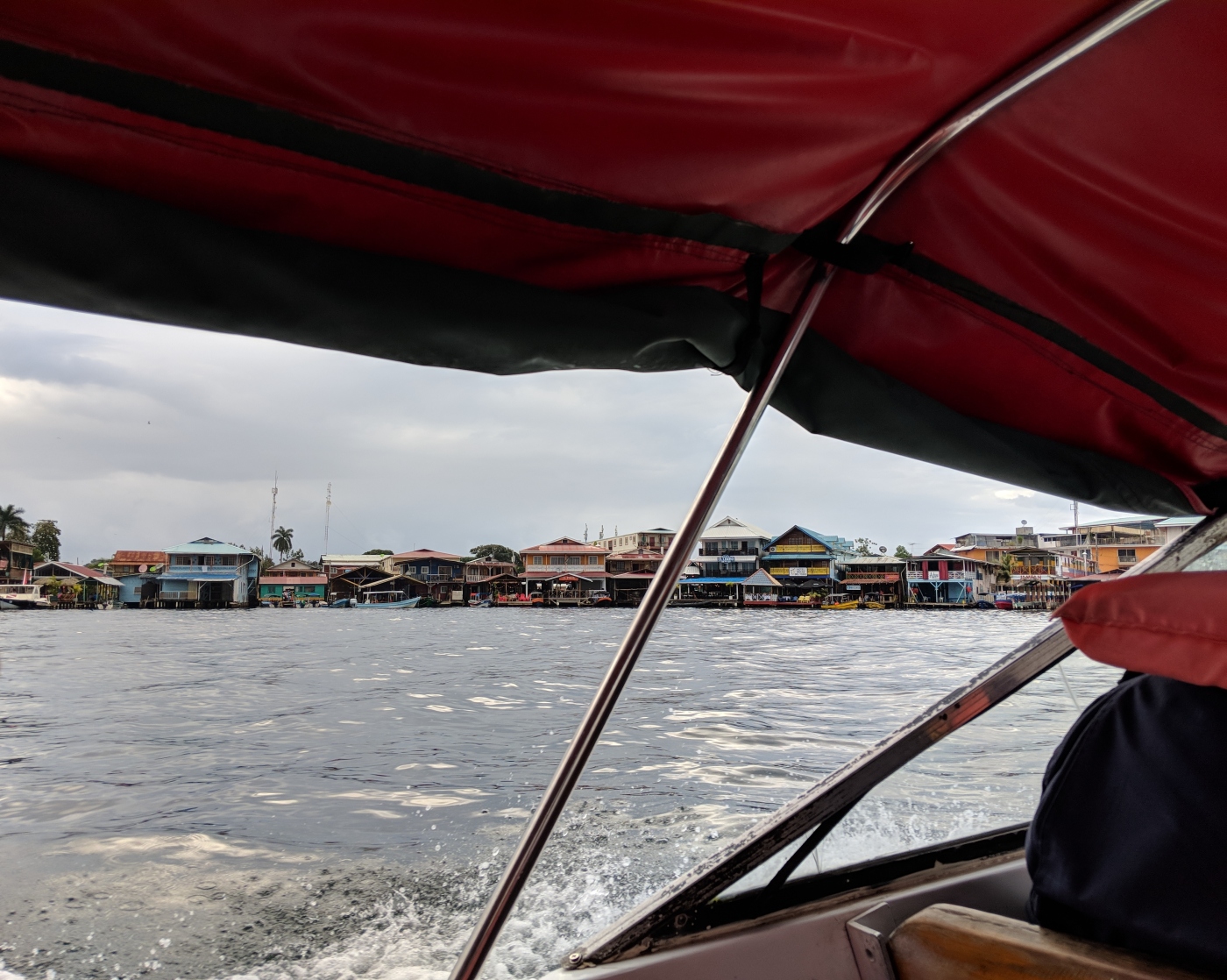 Clayton and I spent our last morning in Boquete hiking the Lost Waterfalls. After our morning coffee from a local farm – nothing compared to Finca Dos Jefes, but we were spoiled now – we bumped along some back roads to find the start to the renowned hiking trail. There are many hiking trails you can go on in and around Boquete, such as the hike up to Volcán Barú or the Quetzal trail. The quetzals are beautiful yet elusive birds found in Central America, with brilliant plumage and a call resembling that of a whimpering puppy. Alas, we did not see any on our trip, though we kept an eye out. We chose the Lost Waterfalls hike since it at least promised views of some cloud forest waterfalls, and a very ancient tree.

Feeling uncomfortable with leaving our little car parked out on the road, we drove it up the pothole-riddled, rocky incline to the hike entrance. Hoping that we were indeed allowed to park there, we began the hike. No one one is in the entrance station to take payment for the hike, so we figured we’d just pay on our way out.

It was a cool, misty morning that held the promise of strong heat later in the day. We soon passed the last of the open clearings and entered the thick of the cloud forests. The forest floor was thick, lush, and verdant, and the canopy high above was whistling with bird song. Bamboo shot up out of the undergrowth, looking like something out of a Sci Fi film. It was sharp and jagged at the top, unlike the soft bamboo I’m used to back home. I saw my first wild bromeliads, this particular species being able to grow high up on trees or in between roots. Clayton found several mushrooms, and we finally came upon the thousand year old tree. It was enormous, and felt like it had been there since the beginning of time. It would take several people with arms outstretched to fully encompass the majestic trunk. All manner of life was teeming on the tree, from birds to insects to bromeliads. A true monarch of the forest.

The trail followed a pipeline up the mountain, one that had clearly seen better days. It was covered in moss and in some places, held up with sticks. The stream to our right was down to a trickle, and I wondered if we were missing most of the waterfalls on this “waterfall hike” simply because there hadn’t been enough rain recently. As we neared the end of the trail, we saw that most of the trail had been washed out by a mudslide during the rainy season. There was evidence of massive flooding and drastic soil erosion. A nice English couple pointed out that they could see where the trail picked up again, but it was a difficult climb. We braved the slippery rocks and found ourselves at the base of an extremely tall waterfall that plunged over some cliffs to where we were below. The waterfall swayed back and forth with the breeze, and at the bottom it was only mist.

All in all, it was a nice hike, though I suspect it would have been far more breathtaking had there been more rain and no mudslide. We followed the trail back to the car and headed back to Boquete. We stopped to view some intriguing rock formations on the side of the road. They reminded me of the basalt columns I’d seen in Iceland, and I suspect they were formed in much the same way. We then stopped at a roadside stand that was set up next to a waterfall, and I purchased a traditional dress of the Ngäbe-Buglé, one of the indigenous tribes of Panamá.

We ate lunch at Otto in Boquete, a sibling restaurant to RetroGusto, where we’d eaten our first night. It’s still strange to think that some of the best Italian food I’ve had was in Boquete, Panamá! We picked up some coffee and more pastries from Sugar and Spice, then hit the road for Bocas Del Toro, our next destination. Our harrowing drive is detailed in my post about driving in Panamá. Give it a read if you haven’t already!

We arrived in the port city of Almirante in the late afternoon. We pulled off at the first convenient store we saw to pick up some water. Clayton went inside to buy some as I waited in the car, and I was immediately accosted by several kids on bicycles, knocking on the windows and shouting “Bocas! Tour! Parking for Bocas!” I shook my head no to them all, thinking that we already knew what we needed to do to cross the water to get to Bocas Del Toro, an island chain off the Caribbean coast. Our AirBNB hosts had told us where to park and leave the car safely. Water purchased, we drove into Almirante, desperately trying to find the “red firehouse” our hosts had mentioned, which would have the parking next to it. The kids on bikes followed us, still shouting. As we got farther away, I saw them shaking their heads in the rear view mirror. I can just hear it now “silly Americans, they really have no idea, do they?” They weren’t wrong. Completely flummoxed, we ended up driving all the way to the port itself – a dead end. Suddenly, a knock on the window. One older man had been persistent, and followed us on his bike even to here. Resigned, I nodded when he asked if I need parking and a way to get to Bocas. Gesturing for us to follow, he led us back through town to a gated lot full of cars.

The parking lot was run by a couple who had a house within the lot, and decided to capitalize on their land. They spoke English and were incredibly friendly, and I was pleasantly surprised when they told me it would only be $3 a day to leave our car there. The lady even let me use the restroom in her house, which was one of the nicest houses I’d seen in the country so far. Our bicycle-helper then took us to one of the water taxi buildings. Clayton thoughtfully gave him a nice tip before we entered, in case he’d have to share it with anyone. Clearly he was employed by this particular establishment – this was confirmed later when the manager also slipped him a few bills for bringing us.

We bought round trip tickets to save money on the return journey, and waited to board the taxi. The taxi itself held maybe fifteen to twenty people, and our luggage was loaded into the front by a young man in flip flops. Soon we were off, leaving the harbor behind. There was no cushioning to speak of on the wooden benches, and my ratty life jacket smelled strongly of harbor water. Once past the calm, soupy waters of the port, our driver (who had an epic knife scar down one side of his face) hit the gas and we were flying over the choppy waters. This was clearly a no-nonsense man who has done the journey thousands of times, and had a timetable to keep.

About half an hour later, we pulled into the colorful harbor of Bocas Town, located on Colón Island. All of the restaurants and water taxi stands backed up to the water, and out in front was the main street. The main street was clearly the most hopping part of town, with a myriad of restaurant and souvenir shops. Evidently, Bocas is a haven for surfers, and the atmosphere certainly reflected that. Taxis waited to take tourists to their hotels. These were no mainland taxis – these were pickup trucks with large tires, made for driving over sand. Taxi drivers tried to charge us $13 to get to our AirBNB, so we declined and decided to walk. We made it about 20 minutes dragging our cases over bumpy roads and sandy ditches before we flagged down a taxi who’d take us the rest of the way for $7.

After several minutes of driving on beaches, the taxi’s tires sometimes getting wet from the waves even, we soon arrived at the turnoff for Nomad Lodge, our home for the next few days. The road up the hill was particularly muddy and narrow, but our driver drove up it without a second thought.

Nomad Lodge is a collection of tree houses set in the jungle, right off the beach. Amanda, one of our hosts, came out to greet us and help with our bags. Amanda and Asher, who we’d meet later, were friendly American expats who run the lodge while doing remote software work. Quite a nice way to live, if you ask me! Amanda left us to get settled, and we took off to explore.

The main building was more of a platform and holds a kitchen and large dining area, and a pool on the deck below. Breakfast was served on the house each morning, and dinner was available almost every night. A cooler full of water and beer was available at all times, and you just put a tick mark next to your name if you took one so you could be charged at check out. All the separate rooms were little tree houses, connected by walkways and hanging bridges. There was no actual “land” on the property past the driveway. The bathrooms were open and airy, and the shower faucets simulated rain, with large, smooth stones for the floor. Our personal tree house just held a bed, some shelves, and a fan, with large netted windows. It was perfect.

We walked down to the beach before dinner, and were surprised to see we had a companion. Our hosts had two dogs, and one in particular took a shine to us and would follow us whenever we went down to the beach for walks. We played fetch with him using a coconut for a bit, enjoying the sound of the waves and the relative quiet after a long day of driving and general madness. We then returned for dinner at the lodge. Asher, our second host, was the chef, and the menu each night was burritos. Not just any burritos – the most delicious burritos we’ve ever had in our lives, with homemade chips on the side. There was a standard menu that went unchanged each night, but there was always a “special” that was Asher’s experiment. Over the next few nights, we enjoyed macaroni and cheese, even curry burritos. Each one was even more delicious than the last, and to this day I yearn for another one of those packages of savory heaven. As the sun set, we collapsed into bed and fell asleep to the sounds of the forest and crashing Caribbean waves.